Everyone loves a good "baddie" 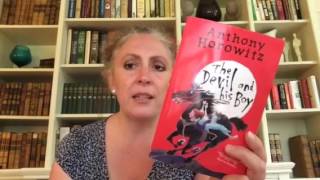 DOTTY series author, Emma Warner-Reed, was pleased to announce the launch of her new YouTube channel, ‘DOTTY about BOOKS’. The channel, which is exclusively dedicated to the review of children’s books, will cover both fiction and non-fiction books and cover all age-ranges from pre-school to pre-teen and from picture book to chapter book. There are no plans to review young adult novels at this time. Authors wishing to submit their books for review should apply for details to i

DOTTY has a face!

Author of the DOTTY Series, Emma Warner-Reed, has commissioned a series of eight drawings depicting the main characters from the series. The first picture, which is of Dotty herself, was unveiled today. The black and white sketch shows Dotty proudly sporting a pony tail, as overwhelmingly voted by fans of the series, who chose this out of a series of three possible hairstyles for the feisty Welsh heroine. The remaining seven characters will be posted on the website, alongside

So delighted to have been given a 5* review by prestigious review site readersfavorite.com. Readers’ Favorite review for industry icons including Penguin, Random House, Simon & Schuster and Harper Collins, as well as celebrity children’s fiction writers such as Jim Carrey and Henry Winkler. Dotty is truly honoured to be in such select company! View the full review here: https://readersfavorite.com/book-review/dotty-and-the-calendar-house-key #dottyreview5 #review #5

One of the most anticipated moments in the world of children’s and young adult literature has arrived. The 2016 Literary Classics Book Awards have been announced and Dotty is absolutely delighted to have been awarded a Silver Award for preteen fantasy, DOTTY and the Calendar House Key. Chosen out of entries submitted from around the globe, the distinguished honorees have been recognized for their contributions to the craft of writing, illustrating, and publishing exceptional